My latest task at work was to setup a server running virtual box to allow all of the developers access to all test machines and to allow us to keep the virtual machines up to date (by updating one set of appliance rather than multiple sets).

I found an excellent tutorial on how to do that here.

After you follow the tutorial to the letter and have your Headless VirtualBox and phpVirtualBox running, you’ll need to add your virtual machines. We already had several that we were actively using so I set out to import them into the new environment.

This was met with resounding failure.

The import feature was not working for me (Could not create the clone medium ‘/path/to/VirtualBox VMs/Disk1.vmdk’ (VERR_VD_VMDK_INVALID_FORMAT)). So I scraped the .ova files that I had exported and copied over the vmdk files – the hard drives of the virtual machines. Once these were added to the virtual box users home directory and chown’d accordingly, I created new machines in the phpVirtualBox interface. For each new Virtual Box, I selected already existing Hard Drives.

Some minor tweaks were required (like removing the CDROM’s) so they would boot, but after that, we were able to connect no problem.

There was an issue with the overall phpVirtualBox throwing errors after clicking on anything. It turned out to be we added (or came with the clean install) a vboxnet0 ethernet connection under File > Preferences > Network. Removing that solved the error (The object functionality is limited (0x80070005)).

So, now we have the following virtual environments and all are working extremely well and fast: 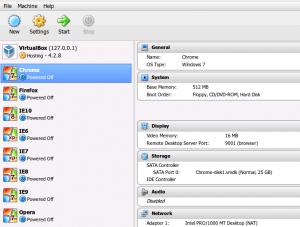 Sadly, MAC OS is not supported by Virtual Box, so we have to continue to use our MAC test machine over this new virtual test environment.

There is a Safari 5.1 for Windows so I may create another appliance for that.